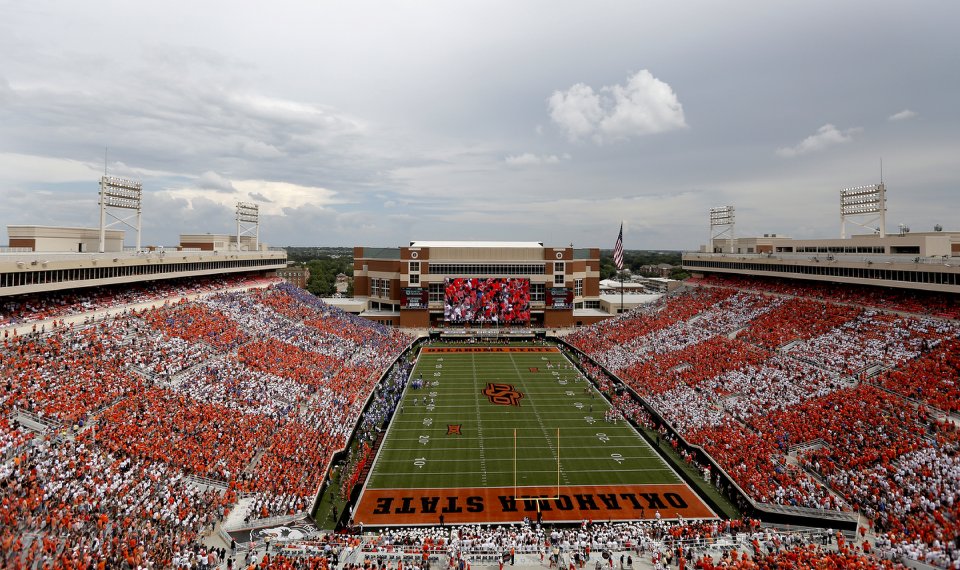 Oklahoma State’s team, Oklahoma A&M, first began playing at the current site of Boone Pickens Stadium in 1913. Originally the stadium was known simply as “Athletic Field,” but renamed Lewis Field in 1914. The name was in honor of Laymon Lewis, who was a former dean of veterinary medicine and of science and literature and one of the most popular figures in the school’s history. In addition to his duties as dean and instructor at OAMC, Lewis served as the school’s acting president in 1914. Lewis helped OAMC established the first school of commerce and marketing in the nation and developed experimental stations around the state. In addition to naming the field after him, the students also dedicated the school’s first yearbook to Lewis.

In 1920, the school built a permanent 8,000-seat grandstand. The stadium originally was positioned in the traditional north-south direction. However, it was reoriented to east-west in order to avoid the strong prevailing winds. It is rare for a stadium in the United States with goals at the east and west ends, and the only one oriented that way in the Big 12. Because of the location of the goal posts, the sun becomes an advantage to the team defending the west end zone during sunny afternoon games as the team defending the east goal has to look directly into the bright sunlight.

Initially, the university planned to build a horseshoe-shaped stadium to be called War Memorial Stadium but these plans were scrapped before any construction of the proposed stadium started. The first addition to Lewis Field came in 1924. This addition included the first steel and concrete portion of the current stadium built on the south side. During the 1929–1930 seasons, 8,000 permanent seats were built to increase the overall capacity of 13,000. In 1947, the south stands were increased from 20 to 53 rows. This caused the capacity to have climbed to nearly 30,000. Also, a permanent press box was then added for the first time.

Prior to the 1950 season, 10,600 seats were added to the north stands making the capacity to increase to 39,000. After the 1971 season, the cinder track was removed and that lowered the field 12 feet. The removal made the space between the field and the stadium retaining walls among the smallest in college athletics. Additional twenty rows of permanent seats were also installed to both sides of the stadium. This expansion including the complete conversion to an artificial turf playing surface cost $2.5 million. The whole cost was financed through private donations.

It was only in 1980 that press box construction was completed at a cost of $1.8 million. The press box has seating for more than 200 members of the print media. There are also separate levels for radio/television broadcasters, photographers and VIP seating on the first level capable of handling 300. Later on, a lighting system for night games was installed in time for the 1985 season and cost approximately $750,000.

Lewis Field was officially renamed Boone Pickens Stadium in 2003, during a halftime ceremony football game against the University of Wyoming. The stadium’s name was changed to honor OSU alumnus T. Boone Pickens, who was a Texas oilman and entrepreneur who founded Mesa Petroleum Company in 1956. He also served as its CEO from 1956 to 1996. In total, Pickens donated $165 million to the university. It is the largest single donation for athletics to an institution of higher education in American history to create an “athletic village” on campus but, the construction of the village was postponed due to the economy’s downturn. Pickens’ donation helped build the west end zone at Boone Pickens Stadium, a multi-purpose indoor practice complex, and many other sports amenities.

During the 2003 football season, OSU broke ground on a $260 million upgrade to Boone Pickens Stadium. The upgrades included a brick exterior to match the modified Georgian architecture of the OSU campus and a connection to the Gallagher-Iba Arena. The stadium turf was later on replaced with Desso Sport System’s Football Pro Artificial Grass Surface in 2005.

The funds used for the expansion of the stadium have been a topic of controversy and discussion among students and the public, including the city of Stillwater. The athletic village came under intense scrutiny within the community and garnered statewide attention as it was said to have contradicted the principles of democracy. In 2005 and 2006, OSU held “town hall meetings” to allow members of the community to express their concerns.

Another hotly contested issue between the Stillwater city commissioners and OSU administrators was the closing of Hall of Fame Avenue. Moore accused OSU of breaking a trust agreement with the city on the closing of the street. In January 2007, an agreement was reached regarding Hall of Fame Avenue granting the city ownership, which could only be reverted to OSU if the city opens a roadway specifically to replace it.

President George W. Bush gave the commencement address during Spring Commencement exercises at the stadium on May 6, 2006. The stadium was officially re-dedicated as Boone Pickens Stadium on Sept. 5, 2009. The rededication was made when the #9 Cowboys opened the fall football season against #13 Georgia Bulldogs. Prior to the game, there was a grand-opening ceremony outside the stadium and coach Mike Gundy, university president Burns Hargis, athletic director Mike Holder, and Boone Pickens cut the ribbon. Attendance for the game was 53,012, which was a new Oklahoma State Football attendance record surpassing the 52,463 from the 2008 meeting with Troy University.

For more information on the Boone Pickens Stadium, please see the specific pages below.